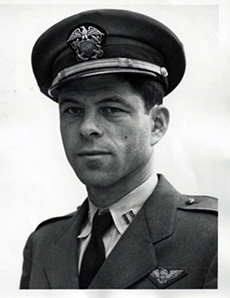 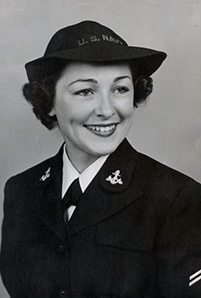 Alan R. Cotariu was born in Chicago in 1918 to Harry and Reba Cotariu, immigrants from Romania. The family moved to southern California in 1919 where Alan grew up. When his father died in 1933, leaving his family with no income, Alan dropped out of school, falsified his age, and enlisted in the Marine Corps in order to help support his mother and younger sister. He was one of the historic China Marines from 1935-1936. When Alan completed his enlistment in the Marine Corps, he returned home. Later, he enlisted in the Navy.

Following flight school, he was designated a Silver Eagle Naval Aviation Pilot. This rate is given to enlisted pilots, who subsequently flew in the South Pacific during WWII. He was one of the early test pilots for Navy jets. After the war, he was commissioned. In 1950, Alan married Veronica Lenox, a WAVE Link Trainer Instructor. Alan retired from the Navy as a Lieutenant, in 1959. He had a total of 24 years of military service to his country. He subsequently worked in the aerospace industry, and eventually returned to school to earn an Associate Degree in Business at Foothill College in 1972.

Veronica (Ronnie) Lenox was born in Winchester, Massachusetts, the third of seven children, to Joseph and Jane Lenox. She attended school in Medford, but after the 10th grade, Ronnie, a lively and strong-willed young woman, refused to continue high school, insisting she did not need further education. When the United States entered WWII, she went to work at General Electric, to support the war effort by filling positions vacated by young men who were now serving in the military.

In 1944, inspired by her younger brother who was serving in the Navy, Ronnie defied her parents’ wishes and enlisted in the Navy. She attended Boot Camp at Hunter College in NY and Advanced Individual Training at the Naval Air Station in Marietta, Georgia.

Ronnie’s primary responsibility as a WAVE was as a Link Trainer Instructor. The Link Trainer was a flight simulator used by every combatant nation during WWII and the majority of the instructors were male. Ronnie, and a small number of other WAVES, were assigned this critical mission because of a shortage of qualified men. Ronnie achieved the rank of Specialist 2nd Class and in 1950, married one of her students, Navy pilot LT Alan R. Cotariu. Per then-current Department of Defense regulations, Ronnie was required to leave active duty at the time of her marriage and separate completely in 1951 when her first child was born.