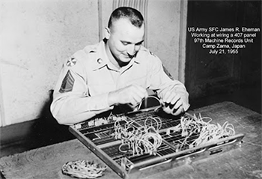 The CPT James and Ruby Eheman Memorial Scholarship is awarded in their memory annually in perpetuity to a deserving Army dependent or spouse who has declared a science, technology, engineering, or mathematics major at an accredited four-year college. CPT James Eheman (1927-2018) was an enlisted veteran of the US Navy. He served in the South Pacific during WWII, and in the Army NCO, and was an activated Army Reserve commissioned officer (commissioned 1955). He was deployed in both the Korean and Vietnam conflicts.

CPT Eheman was a participant as early as the 1950s in the then newly-developing automated data processing career specialty. He spent the majority of his Army career serving in Machine Records Units and Data Processing Units, the pioneering units of computer information technology that provided timely men and material data to Army commanders.

After retiring from the Army in 1969, he had a second career in the US Civil Service as a computer programmer with the US Army Computer Systems Command until retiring from the Civil Service in 1986. CPT Ehemans awards included Army Parachute Jump Wings, the Army Bronze Star for Meritorious Service, and the Army Commendation Medal with six oak leaf clusters.

Ruby Redd Eheman (1925-2016) married James Eheman in 1948 as his Army career was beginning. Ruby was born as a twin sister to her parents in rural Georgia. She, her twin, and an older sister were raised on a farm by her mother who was widowed when Ruby and her twin were seven years old. They endured the hard economic times of the Great Depression.

As an Army spouse and mother, she grew strong and highly skilled at leading her Army household. Ruby packed the family and household for relocation to the next Army duty location where CPT Eheman was stationed. Crossing both the Atlantic and Pacific Oceans by ship, Ruby and their children joined him at duty posts in Japan, Germany, and at posts in various U.S. states.

Both CPT Eheman and his wife of 68 years, Ruby, grew up in humble circumstances in the South and recognized that a good education is vital to a fulfilling life and career advancement. They encouraged their three children to study hard, attend college, and appreciate learning opportunities. Their children were inspired by their parents and succeeded in becoming accountants and computer science professionals. They wish to help facilitate a similar opportunity for others with similar Army life experiences. This Memorial Scholarship will assist an Army dependent or spouse in achieving success in the study of science, technology, engineering, or mathematics and obtaining degrees.