The First Lieutenant Scott McClean Love Memorial Scholarship is awarded in his memory annually in perpetuity to a deserving student. Preference for award of this scholarship is given to students who are majoring in the Fine Arts.

Scott McClean Love was born at Fort Campbell, KY, on 7 February 1974. Scott excelled in drawing, winning awards as early as kindergarten. He loved reading and always noted the book’s illustrator. With his sense of humor he made friends easily, and he enjoyed being different, not ordinary. In high school, he focused on writing, art, and theater. He was a film critic and cartoonist for the school newspaper, had featured art in the school literary magazine and performed in several productions, including The Lottery, The Odd Couple, The Music Man, and A Separate Peace. He was chosen best actor in his senior year and won honors at the state level for painting and acting. Scott graduated from Grissom High School in Huntsville, AL, in 1992. 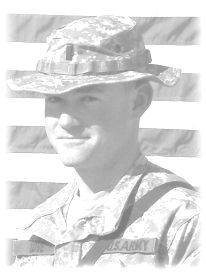 Scott majored in film production major at Florida State University, earning a Bachelor of Fine Arts in 1996. His senior film project credits included being director of photography for The Parting Glass and author of screenplay for Mech Head. After graduation, he and a film school friend worked on the production staff at the Houston Film Festival before traveling to Los Angeles and pursuing work in the film industry in script writing.

Scott enlisted in the Army in 1999 to secure a position in Military Intelligence and attend the Defense Language Institute in Monterey, CA. While attending DLI, Scott married his wife Aimee, and their daughter Vina was born.

After completion of the Arabic language course and interrogator training, Scott was assigned to the 312th MI Battalion at Fort Hood, TX . Scott deployed to Kuwait in November 2001 during Operation Enduring Freedom. After his return to Fort Hood, Scott completed the NCO Academy as Distinguished Honor Graduate.

In 2003, Scott left Fort Hood to go to Officer Candidate School . Following completion of OCS and other courses at Fort Benning, Scott was assigned to 2nd Battalion, 6th Infantry stationed at Baumholder, Germany. His unit deployed to Kuwait in November 2005 with Scott’s platoon assigned as part of Task Force 1-35 Armor. Following several months serving as Central Command reserve, his unit entered Iraq for operations in Anbar province. On 7 June 2006, Scott and PFC Nick Crombie were killed and two other soldiers were wounded while on a combat patrol in Ar Ramadi when an improvised explosive device was detonated, destroying their vehicle.

Some words about Scott from letters from soldiers in his platoon: “Scott always had the moral courage to do the right thing.” “He remained strictly professional. He treated everyone â€“ seniors, peers, the lower enlisted, even the Iraqis â€“ with respect and dignity.” “He faced the risks and challenges presented to him head on, and he led from the front.”