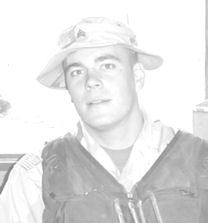 The Sergeant Andrew Edmund Topham Memorial Scholarship is awarded annually in perpetuity to a deserving student. Preference for award of this scholarship is given to students who are family members of veterans who served in either Afghanistan or Iraq as part of the Global War on Terrorism.

Sergeant Topham is the son of Edmund and Laura Topham, brother to Kristin Topham Homze and Denise Topham-Williams, and father to Ashley Topham. To family, he will always be “Andy”, but to high school friends and soldiers in the Army, he preferred to be “Drew”. Andy grew up in Randolph, Massachusetts, a suburb south of Boston. As a young boy, he was active and enjoyed being involved with the Boy Scouts, karate, youth soccer and little league baseball.

The Tophams are a close knit family and many memories were made around the kitchen table and on vacation. Growing up, Andy spent summers on the beaches of Martha’s Vineyard fishing for blues, digging for clams and quahogs, riding his bike and exploring at Felix Neck. Winters were spent on the ski slopes of Gunstock in New Hampshire where often times he was no more than a blur coming down the slopes. As a child, Andy was adventuresome, if not daring. He loved the outdoors and spending time with family and friends.

Andy attended Randolph High School and was a member of the football and wrestling teams. He graduated in 1997 and later, in 1999, decided to join the Army. Andy completed boot camp at Fort Jackson in Columbia, South Carolina and his sisters were there to celebrate with him. He continued on to Fort Gordon, Georgia for Advanced Individual Training (AIT). Andy was subsequently assigned to Fort Huachuca, Arizona where he served with the 86th Signal Battalion as an Information Systems Operations-Analyst. During his time at Fort Huachuca, Ashley was born and Andy became a father. Ashley brought true joy, unconditional love, and new purpose to his life.

In November 2001, Andy was deployed to Afghanistan and then in January 2003 to Iraq as part of the Global War on Terrorism. It was during Operation Enduring Freedom in Afghanistan that he was awarded the Bronze Star medal. The Bronze Star is awarded to individuals who distinguish themselves by heroic or meritorious achievement or service while engaged in military operations involving conflict with an opposing foreign force.

After returning to the U.S., he transferred to Fort Gordon where he became an AIT instructor. He trained soldiers in signal technology, initially as a soldier and later, as a veteran and civilian.

Andy was fortunate to have the love of family, strong ties to friends, and the support of mentors along the way. Andy was a strong but stubborn individual. He was quiet but enjoyed the company of others. He was quick to laugh and his smile could light up the room. He was easy to love and is hard to live without. He is missed every day. He has left an indelible mark on many and his memory will continue on. The following are impact statements written by two of Andy’s mentors, CW2 Marvin (Nate) Werve and COL David E. Dodd.

SGT Topham was a great soldier and an even greater non-commissioned officer (NCO). He deployed to several battlegrounds during his career and made military communications look easy in the harshest conditions with limited assets. He was often the essential subject matter expert who ‘saved the day’ with his technical expertise. He was known for accomplishing every mission he was assigned, and he always went above and beyond what was called upon him to do. SGT Topham was an immensely lauded soldier for his achievements, which, he earned through hard work and perseverance. He was a friend to all, shared his life’s experiences with those around him, and earned respect from others by his actions. He trained several soldiers who are now elite signal soldiers serving as NCOs, warrant officers, and commissioned officers. SGT Topham will always remain an inspiration to all! He served his nation with honor and distinction and made sure that others understood that this was what being a soldier was about.

Sergeant Andy Topham was the best sergeant within the 86th Signal Battalion during my command tour of duty. I deployed with him to Afghanistan and Iraq. I think of Andy often with the fondest of memories. He was a special person who blessed my life tremendously. Even though he was half my age, I learned so much from him. Mark 10:45 says, “For even the Son of Man did not come to be served, but to serve, and to give His life as a ransom for many.” When I read this verse, I think of Andy. He gave selflessly so many times to ensure the mission was accomplished. Joshua 1:9 says, “Have I not commanded you? Be strong and courageous. Do not be terrified; do not be discouraged, for the Lord your God will be with you wherever you go.” Again, Andy makes this verse come to life for me. He led his life with boldness, strength, courage, and confidence. He was the epitome of the quiet professional.

America’s success during the early days of Operations Enduring Freedom and Iraqi Freedom were made possible by Andy’s untiring work to ensure combat forces had effective communications. I witnessed him go days without sleep to install critical communications circuits supporting combat forces who were in contact with the enemy.

He was a team player and always placed the mission and others before his own needs or requirements. Ecclesiastes 4: 9-12 says, “Two are better than one, because they have a good return for their work; if one falls down, his friend can help him up. But pity the man who falls and has no one to help him up! Also, if two lie down together, they will keep warm. But how can one keep warm alone? Though one may be overpowered, two can defend themselves. A cord of three strands is not quickly broken.”

Andy was the stronger half of many teams and the cord that kept our unit from breaking. He touched us all and I thank God for the opportunity to know, respect, and serve with him.