Posted at 04:13h in Press Release by Chelanie 0 Comments
0 Likes 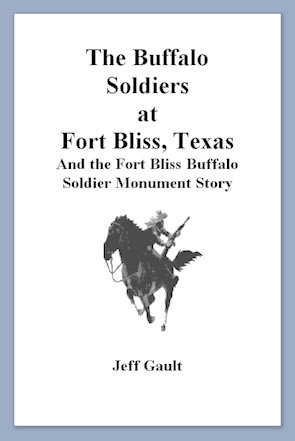 The Army Scholarship Foundation Press announces publication of The Buffalo Soldiers at Fort Bliss, Texas, authored by U.S. Army veteran Jeff Gault. The book chronicles the storied history of the famous Buffalo Soldiers of the 9th and 10th U.S. Cavalry and the 24th and 25th U.S. Infantry regiments during their service on the frontier and into the 20th Century, focusing on their service at Fort Bliss, and El Paso, Texas. It has been ten years since the dedication of the Buffalo Soldier Monument at Fort Bliss, and the book also tells the story behind the construction of the monument and describes the efforts of a small group of selfless and dedicated volunteers of the Buffalo Soldier Memorial Association who made this monument a reality.

Life on the frontier was hard for the Buffalo Soldiers, and the living conditions at Fort Bliss and the many other posts were austere. The soldiers generally constructed and maintained their own barracks, which had dirt floors and sod or thatched roofs. The soldiers cared for their horses and mules, repaired their own clothing, gear and equipment, and were largely responsible for their own quality of life.

As they deployed across the vast southwest, the Buffalo Soldiers proved themselves to be skilled and tenacious fighters. Although tasked to cover vast regions with limited numbers of men, they made more than held their own in helping to quell the Indians and pacify the hostile territories. Despite not infrequent discrimination and hatred from those whom they were tasked to protect, the Buffalo Soldiers served with distinction.

The Buffalo Soldiers served intermittently at and in the vicinity of Fort Bliss and El Paso for nearly 50 years. Although never assigned in large numbers, they nevertheless often represented the bulk of the soldiers assigned at the post, and they made an indelible mark on the history of the area.

The book also explains the special significance of the location of the monument on Lee Road near the Robert E. Lee Gate of Fort Bliss. The monument stands not only as a tribute to the famous Buffalo Soldiers of the past, but because of its location, it also represents the link between the Buffalo Soldiers of the past to the all-African-American anti-aircraft artillery units which trained on the post in the 1940s and 1950s.

The book was completed on the ten year anniversary of the dedication of the Buffalo Soldier Monument on Robert E. Lee Road on Fort Bliss. Release date was held until February 2010 to coincide with Black History Month celebrations and activities on Fort Bliss.

Jeff Gault served at Fort Bliss from 1990 until his retirement from the Army in 1999, with two deployments to the Middle East during this period. He is a veteran of Operation Desert Shield/Desert Storm, and was the first Garrison Commander of Fort Bliss. Currently, he is a business executive in north Texas.