Posted at 04:06h in Press Release by Chelanie 0 Comments
0 Likes 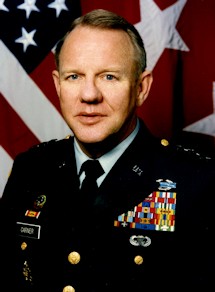 General Garner was born in Florida and was commissioned in the U.S. Army upon graduation from Florida State University in 1962. He served two tours in Vietnam, and commanded an air defense battalion and a brigade in Germany. He also served as the Deputy Commanding General at Fort Bliss. While assigned as the Deputy V Corps Commander in Germany, he was deployed to northern Iraq following Operation Desert Storm to lead efforts to secure Kurdish areas. He later commanded the Army Space and Strategic Defense Command, and concluded his active service as the Assistant Vice Chief of Staff, retiring as a Lieutenant General in 1997.

Following his Army service he became president of SYColeman Corporation. In 2003 he was selected by the Secretary of Defense to lead post-war reconstruction efforts in Iraq. In this role he oversaw development and implementation of plans to assist the Iraqis in establishing their governance and reconstructing the country. Following his government service in Iraq, he again returned to service with industry.